On a Harnett County cattle rescue mission after Hurricane Florence, farmer Stephen Broadwell noticed a little white muzzle poking up from the floodwaters – a newborn calf reaching for air. He had to act fast.

Stephen pulled the calf from the flooded ditch and carried it on horseback to higher ground. His wife, Heather, and 10-year-old daughter, Sadie, took over the calf’s care. Sadie’s 4-H training – in both livestock care and community focus – were about to come in handy.

The rescue was one of countless acts of service by North Carolina 4-H’ers and their families.

The national 4-H program focuses on hands-on learning, reaching more than 250,000 youth each year. Its name comes from its pledge: “I pledge my head to clearer thinking, my heart to greater loyalty, my hands to larger service, and my health to better living, for my club, my community, my country and my world.”

They cooked and delivered meals for hurricane victims. They distributed donations of household essentials and food for displaced pets. They visited children staying in hurricane shelters, playing games and bringing much-needed laughter.

“Our 4-H’ers stepped up for their neighbors and communities in ways big and small,” says Mike Yoder, state 4-H leader with NC State Extension. “They went above and beyond, and some of them continue to help with what will be a long period of recovery.”

Here, we feature just a few of the 4-H’ers who made good on their pledge to put their hands to larger service in their communities and beyond.

Moral Support – and Beyond:
Luke Barber, 13

After Hurricane Florence forced a Bladen County woman to leave 40 chickens behind in her backyard coop, County Cooperative Extension Director Becky Spearman turned to someone she knew would have answers: 13-year-old Luke Barber.

Luke not only loves chickens, he also knows a lot about their care. As a 4-H’er, he’s focused his project work on poultry, particularly chickens – and this was a chance to put what he’d learned into action.

Luke set to work, cleaning up the coop and securing and delivering the feed the chickens needed in order to survive. As one of Luke’s first times volunteering directly with someone in need, he was grateful for the chance to provide moral support.

“When it’s one-on-one, you get a better connection with the people that you’re helping. You get to know their story,” Luke says. “It meant something, being able to talk to her, get to know her and help her out.”

Caleb Street’s home in Gaston County is nearly a five-hour drive from New Bern, but that distance didn’t deter the 13-year-old from reaching out when the city was hit hard by Florence. He learned that school library books in the coastal city had been ruined by the flood, and he felt called to help. So he posted flyers at his church, Antioch Lutheran, in Dallas.

If something bad happens, [reading] takes my brain off of it.

He was, as his mom put it, “overwhelmed.”

“He’s never done anything on this scale,” says Brenda Street, support specialist with N.C. Cooperative Extension’s Lincoln County Center. “The experience was a rewarding one for him.”

“I thought it was important to help out this way because for me, when I read, it’s like I’m in my own little world,” he says. “If something bad happened that day, it takes my brain off of it for a little bit. And I’ve learned a lot from books.”

Orphaned by its storm-stressed mother, the bull calf that Stephen Broadwell rescued would need close attention over the weeks and months to follow.

You don’t have time to stop and panic.

Her mom and dad lead Harnett County’s 4-H Livestock Club. Sadie knew that caring for the calf – which she named Pirate – would mean commitment. More than two months after the September storm, Sadie still patiently bottle-fed the calf twice a day.

The farmer who owned the calf, so appreciative of what Sadie and her family had done to help, ended up giving it to Sadie to keep.

Nurturing Pirate was just one of the ways Sadie chose to help her community: She also put a box at The Double L tack shop in Coats to collect donated supplies, such as halters, shavings and antifungal soaps, to help area horse owners.

What do the four H's mean to the students who live them?

Though the hurricane devastated families and communities, Heather Broadwell said she saw a silver lining.

“Sadie got to see that in these situations, you just go to work,” she says. “You don’t have time to stop and panic or to worry just about yourself. You take care of what needs to be taken care of.” 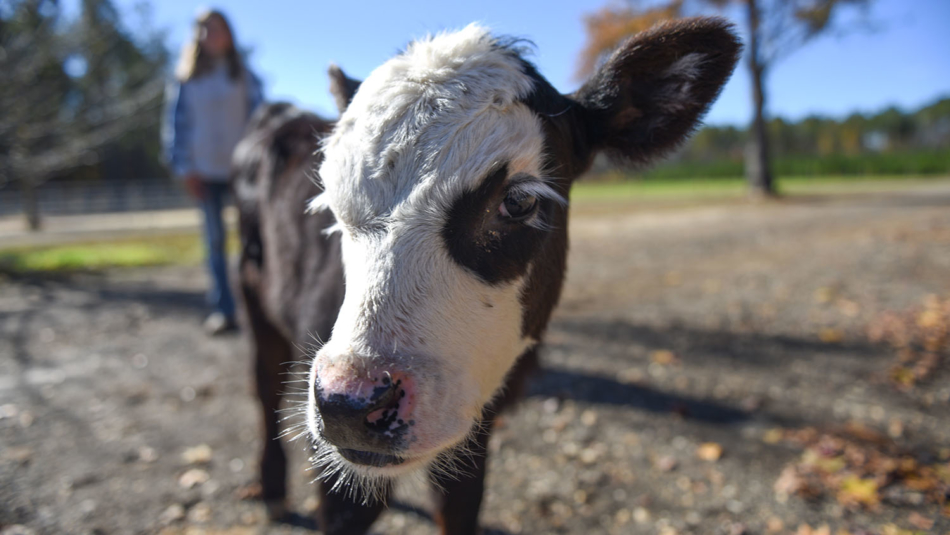