When her husband passed away from liver disease in 2015, Lisa had been determined to keep their cattle farm afloat. A packaging designer by trade and a horsewoman by experience, however, she had to rely on neighbors to help manage the herd. There was too much to learn, and not enough time.

On March 12, 2018, Lisa braced herself for a brutal decision: She was going to have to sell.

Until she checked her email.

In a small box at the bottom of the N.C. Cooperative Extension newsletter: “NC Leadership and Cattle Handling for Women Producers, May 5-7.”

“If I can learn enough in three days to manage this place and be comfortable working around the cows,” Lisa thought, “then I’ll keep the farm.”

Back in 2009, NC State Extension employee April Shaeffer noticed something that struck her as odd.

In cattle-handling workshops, couples often attended together – but the men asked most of the questions. Women also tended to hang back during practice sessions, watching while their partners got the hands-on experience.

“I knew that at home on the farm, these women were pitching in alongside their husbands to help, and they needed to learn just as much,” Shaeffer says.

So in March 2010, Shaeffer partnered with the NC Cattlemen’s Association to launch a new kind of cattle-handling workshop. The idea: give women a supportive, peer-based atmosphere for learning and networking.

The tone of the workshops is encouraging but practical. If Shaeffer wants to prepare these women to run farms of their own, she has to pack a lot into a few days.

By the final day, participants can administer vaccines, manage birthing problems, drive a truck and trailer through an obstacle course and back up both gooseneck and bumper-pull trailers. They’re versed in the essentials of beef quality assurance and low-stress animal handling.

“Sometimes I leave after the workshop in tears or with a heavy heart, hearing some of the struggles these ladies have gone through,” Shaeffer says. “I just hope I can make a difference.”

Lisa Smith met David Glosson in 1983. He was a senior in the 4-H cow program at Southern Alamance High School; she was a sophomore in the 4-H horse program at Walter M. Williams High, nine miles down the road.

They started dating during her senior year – but when he proposed marriage, she said no. He wanted her to stay home on the farm; she had her heart set on NC State’s College of Textiles.

Lisa left to focus on her career, but she never forgot David.

“He’s the only person I ever wanted to marry,” Lisa says. “It just took us a while to get to the same place at the same time.”

Fast forward almost 20 years, to the big ice storm of December 2002. Now a full-time packaging designer, Lisa was also leading Extension’s 4-H horse program in Alamance County. David was running his family’s farm, plus a landscape business in southern Alamance. He called to check up on her during the storm.

“We talked every day after that,” she says.

Less than a year later, after a George Strait concert, David proposed to Lisa again.

He renamed the cattle operation in honor of their partnership: D&L Glosson Farms. Lisa helped with produce and haying. David handled the beef cattle. In the evenings, they liked to put on George Strait and dance the two-step around the house.

“We were just always together,” she says. “We were best friends.”

It’s unusual for an Extension technician to head a workshop, let alone a grant. For Shaeffer, it’s been a passion project. She prefers to keep the focus on the women who have completed the program – she is fiercely proud of their commitment and their accomplishments – but certain facts must be mentioned.

I just hope I can make a difference.

In 2016, Shaeffer won Extension’s Outstanding Subject Matter Program by an Individual Award. In 2017, she won NC State’s Equity for Women award. She’s been featured on the national television program FarmHer. By 2018, the workshops had to be capped at 20 participants, who often range in age from 18 to their mid-70s. There is always a waiting list.

“April is a stellar example of how Extension employees keep their eyes open for new ways to serve North Carolina citizens right where they are,” says Richard Bonanno, director of NC State Extension.

For Lisa Glosson, that service came just in time.

In sickness and in health

In 2008, doctors diagnosed David with cirrhosis of the liver and gave him six months to live. He and Lisa started to downsize the farm and shift the operation from meat to breeding. The 35 acres are the remains of a 300-acre dairy farm, in the Glosson family since the 1880s.

Lisa learned what she could about cattle handling and farm management, but David needed her as his nurse. He was too weak to do much teaching.

They got more time together than the doctors predicted, but David passed away on May 25, 2015. He was 50. On the day he died, D&L Glosson Farms’ first calf was born.

There are about 400 livestock farms like the Glossons’ in Alamance County, often run by families like David’s who have been there for generations. The county’s 28,000 acres of pastureland support livestock, dairy and poultry farms that are worth about $20 million to the local economy, says Mark Danieley, director of Extension’s Alamance County Center.

It’s not just Lisa who is concerned about keeping these farms in the family. The first pillar of the Alamance County Board of Commissioners’ five-year plan is preserving agriculture – especially the locally owned and operated farms that provide “economic stability, increased employment and environmental benefits” to the rural county.

But by spring 2018, despite Lisa’s best efforts, time was running out for D&L Glosson Farms. Proper cattle care required an overwhelming amount of specialized knowledge.

That’s when Lisa changed her life by checking her email. She had been worried she’d be laughed at for how little she knew in a traditional education setting, but she felt safe around other female farmers.

“The ease of that is why I went,” she says. “I knew the cows needed things that weren’t getting done, and I needed to go find out how to do them.

Enter Shaeffer and her inter-organizational posse of agricultural experts. You know what happens next. 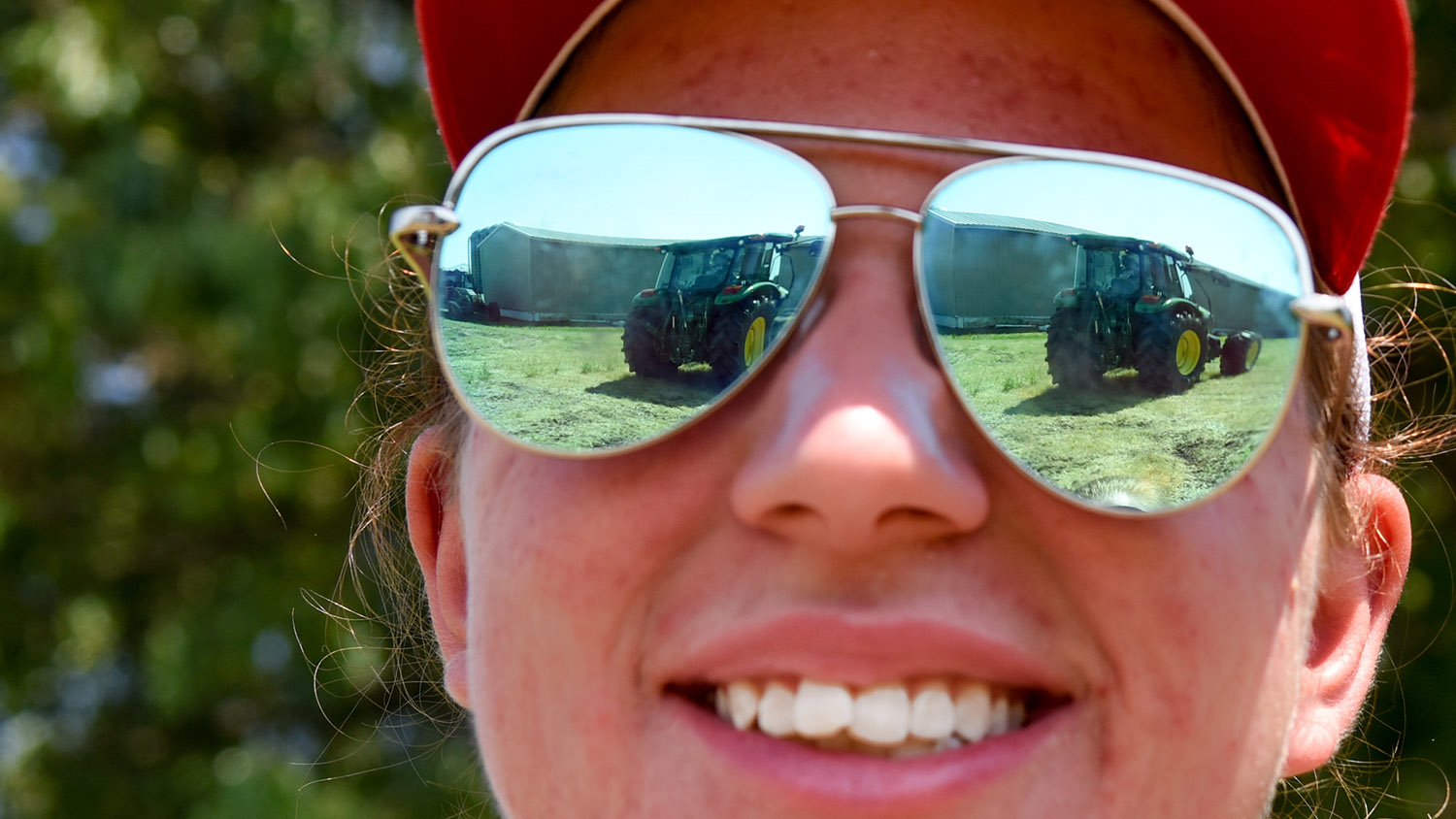 Check out the latest information on the NC Leadership and Women’s Cattle Workshop.

Spring 2019. Lisa is welcoming her fourth round of calves at D&L Glosson Farm, a small herd for now but growing. Neighbors and friends still pitch in to help, but the threat of having to sell has lifted.

“I feel like I’m helping carry on a family tradition, and that’s a good feeling,” Lisa says. “I now have the knowledge to keep the herd growing, thanks to April.”

As for the workshop, its future is bright. Now funded by a Southern Risk Management Education Center grant, the annual event has grown to become a collaborative Extension effort across state lines.

NC State is the grant leader, with sub-contracts to Clemson University, the University of Georgia, Auburn University and Mississippi State University. Shaeffer earned her master’s degree in agriculture and extension education while working full time as a research specialist for CALS’ Department of Animal Science.

One of the most important indicators of the workshop’s success? Women like Lisa.

“She is still in the cattle business,” Shaeffer says, “and it makes my heart smile.” 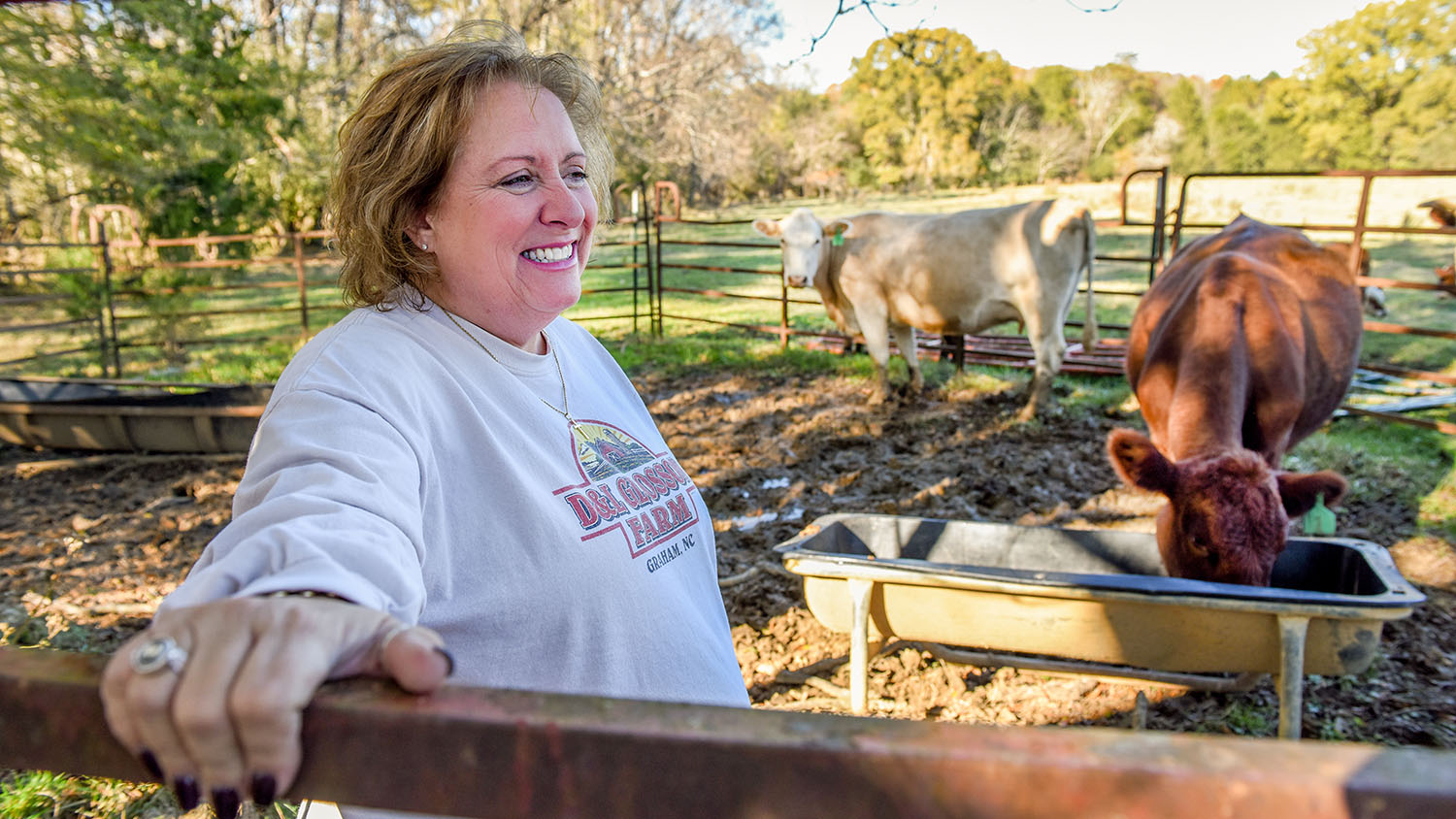